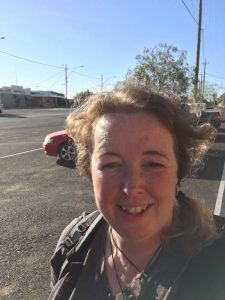 Day four began in glorious weather – with a “proof of life” selfie taken and posted to Facebook so my Dear Old Dad knew I was alive and well!

I was most excited about today as my Long-Suffering Mentor had gained permission from the boss to take us out for breakfast to a very special place! And so began a small (by outback standards!) drive to Parkes, NSW. 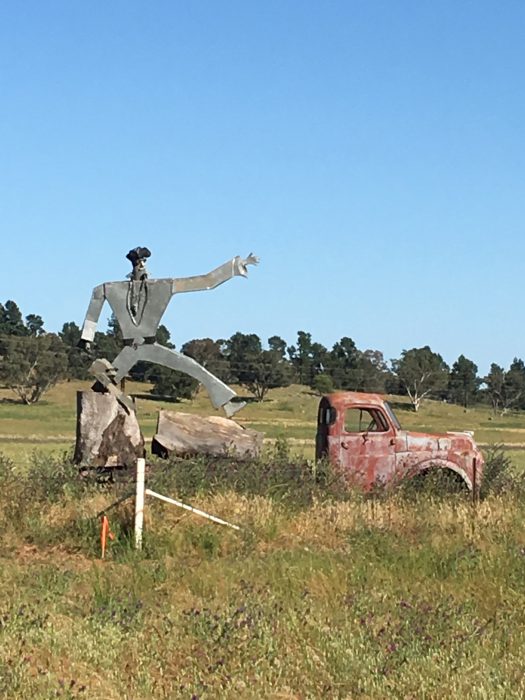 We travelled for about three quarters of an hour through a few country towns but mainly wide open spaces with endless paddocks of golden wheat until out of the middle of no where, a HUGE radio telescope appeared. It seriously looked like something from a Mars landscape, totally opposite of it’s surroundings and epic in it’s formidable size and appearance. I was mesmerised!

The next hour was spent devouring devine Eggs Benedict and running around the many information booths and signs that are set up at the Parkes Dish! Me, being OCD when it comes to having to read every bloody sign (!!!!), looked like a flipping flea bouncing around and squealing intermittently with various sounds of awe and gushing. Using a parabola to “whisper” to Sanja and Althea from 100 metres away was AWESOME! This was one of the best experiences I have ever had – if you are somewhat of a science nerd – this is the place to visit! 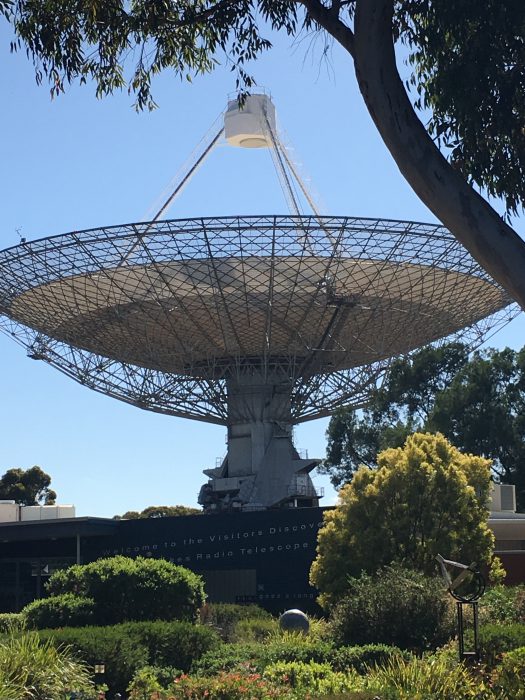 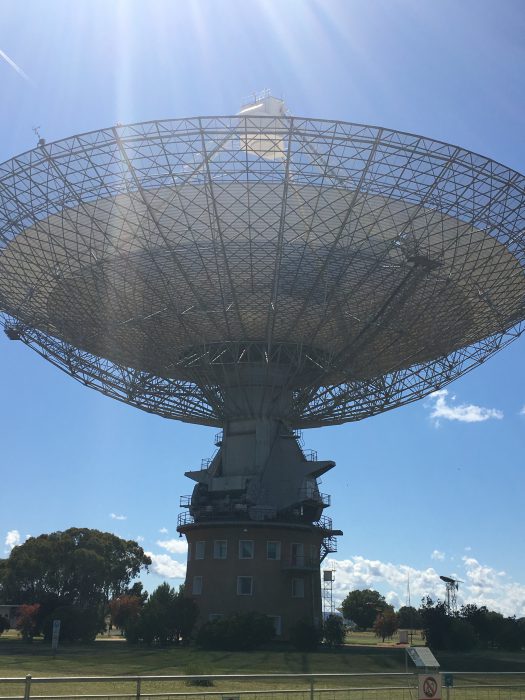 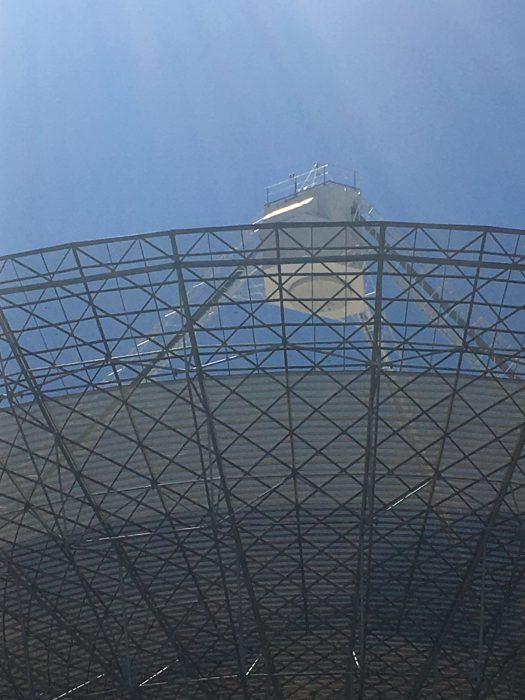 But duty called, and we were here to work (!!!) so once again we set off back toward Fifield for our last day of sampling. Today was an all female geologists team as our Consultant Geo, David (poor guy had spent two days trapped in the car with me prattling on about box structure of minerals and how excited I was that I could finally identify it through a hand lens!) had left us alone in the wild (hardly!). Actually, I should talk more about David as I forgot to mention him in previous posts! David was our Consultant Geologist for this field trip and had actually grown up in the area of Trundle so was deemed a “local”. He reminded me of an energiser bunny – he would just go go go! Scarily intelligent, best sense of humour, and extremely patient, as soon as he found out I was a geology student he became obsessed with teaching and showing me every minute detail of geology and mineralogy, much to my absolute delight and he seemed delighted by my enthusiasm! He even awarded me with a hand lens (which is the best bloody hand lens I’ve ever seen!)…..and I needed a hand lens so I really appreciated it! 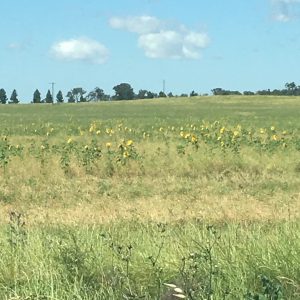 I love the vastness of the country, but I also love the variation. Surrounded by fields and fields of golden wheat, we then came across a paddock of sunflowers, all merrily worshipping the sun and pointing in the same direction. The simplicity of the sunflowers actions and yet the complexity of why and how it does this fascinates me. I just love nature so much…..

So, with our all female geologist team preparing for a big day of sampling, I decided it would be best if I drove, while Dr. Sanja plotted (sounds devious but actually it’s plotting points on a map where we sample or find something interesting!) and Althea navigated. We made a great team, working together like a delicate ballet of choreographed…….well actually…..we did work well but it was more digging holes, gathering samples (sometimes from extremely stinky creek beds!), swatting flies (thank the LORD for fly veils!), squatting for a wee behind bushes, and gathering red laterite dust in EVERY single orifice imaginable! It was pure heaven! 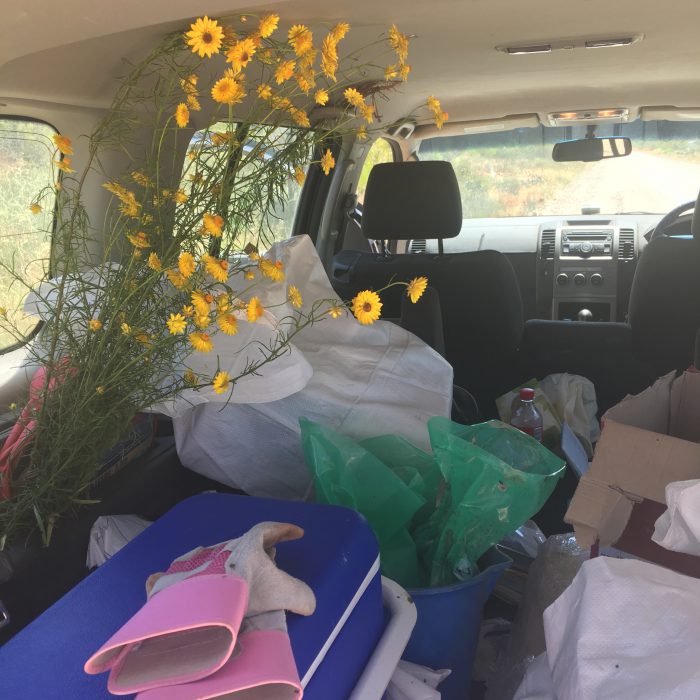 This picture is proof we were an all female geologist team……please note the coke bottle (which came in handy when identifying limestone – HA! See Sanja – drinking coke isn’t all bad!) and the stinky, bagged samples in a bucket (we were very glad they didn’t fall over!).

Driving on outback roads can only be described as hair-raising. With several things to watch out for at once, concentration and guts are the key to successfully negotiating outback roads. The key to outback driving is to just go for it, don’t swerve for anything, and hold on like the clappers! Roads that are like corrugated iron, huge pot holes, crazy birds, manic kangaroos, lazy lizards (the size of crocodiles – I’m NOT kidding!), sun glare – all while trying to keep an eye on the change in landscape, rock terrain, and having your Long-Suffering Mentor periodically yell “STOP”, or “HERE”, or “SLOW DOWN”, or “Oh look at that lizard, that’s such a nice lizard, HELLO lizard!”…….

Whereas Sanja and Althea were looking for interesting outcrop of mafic rock, I was mesmerised by the Quartz (as usual!). I love quartz. It’s common, yes, but it is so pretty and can be so different depending on the amount of heat and pressure it endures. In my rock collection I have many, many samples of quartz and I had to stop myself from picking up every single quartz rock I saw, because they were all so amazing and beautiful. But this one, I just couldn’t manage to get into the car! Plus Sanja said no….. 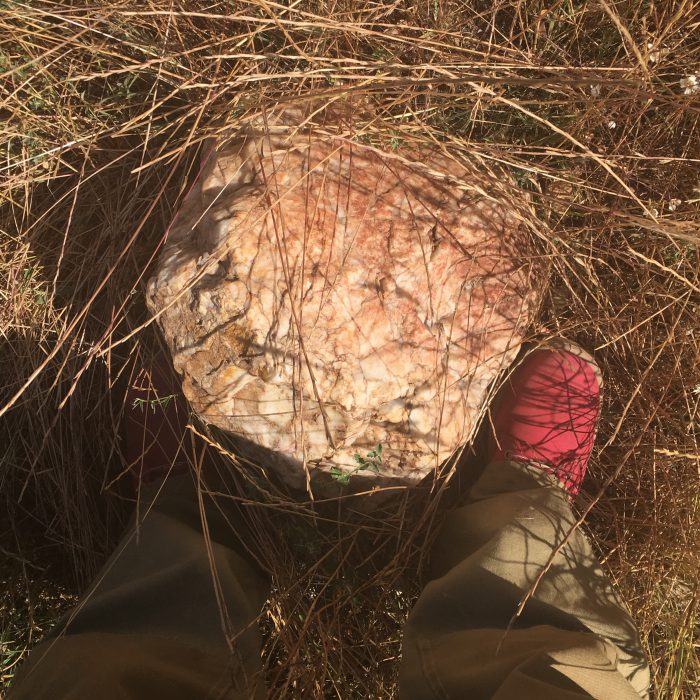 So after a very busy day, we headed back to Trundle for a cold drink and another great pub meal. Saying goodbye to the locals was surprisingly touching – they had all been so welcoming and accepting of us. So with hugs and kisses with Middy the pub dog, we retired to our rooms to pack and prepare for an early departure in the morning……

Bye Trundle! I hope I come back again……