Being the totally organised travellers that we are, my LS Mentor set an alarm for 6.30am allowing us a leisurely time for showers and breakfast before trotting across the road to the bus for the airport, having checked out with minimal hassle. Unfortunately LS Mentor’s clock was still on Victorian time, so I woke up thinking there is way too much light coming through my window, grabbed my watch and immediately began screaming “we’re late” and rushing around like a mad woman.

We eventually made it out of the hotel and across the road – dragged all our luggage onto a bus – realised we hadn’t eaten breakfast or even had a cup of tea! But we quickly arrived at the Queenstown Airport and there she was……. 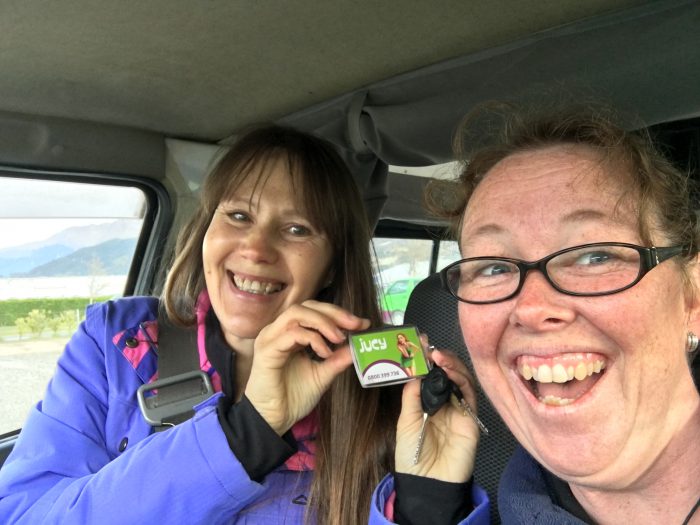 The van is great! Fully self contained complete with dunny and shower, kitchen and two double beds……well? We will work it out! After a quick run through on how to use the sink, shower, how to empty the toilet (eww!) and how to drain all our waste water especially while travelling – we seemed pretty impressed by our setup and were confident enough to meet with the rest of the post-conference tour. Having organised our own transport we were to meet the group in Cromwell next to “The Big Fruit”…. 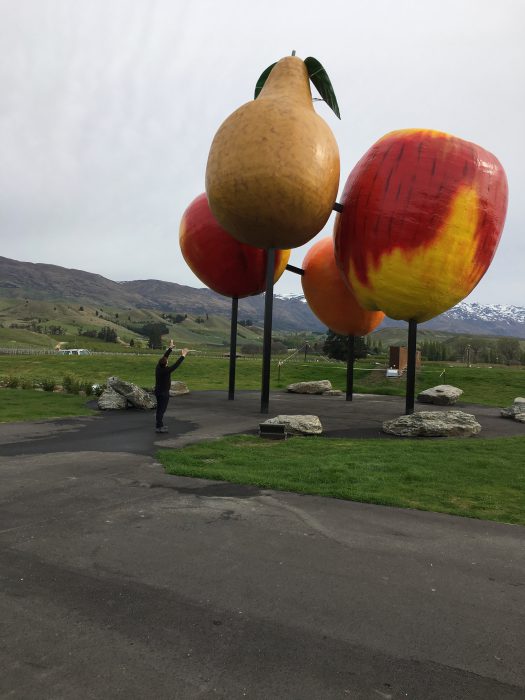 Having coffeed up and raring to go we started off in convey from Cromwell, northeast over Lindis Pass to Omarama. The clay cliffs of Omarama are from the Neogene time and are known as the Clay Cliff Badlands. Beautiful cliffs of sandstone and siltstone, we embarked on a journey up the badlands, squeezing through crevices until it became too thin and we couldn’t fit through! Loads and loads of beautiful purple cherts. I was in heaven! 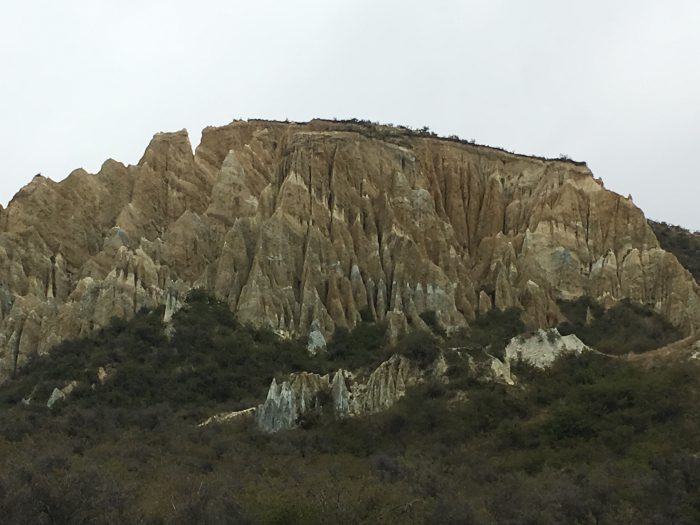 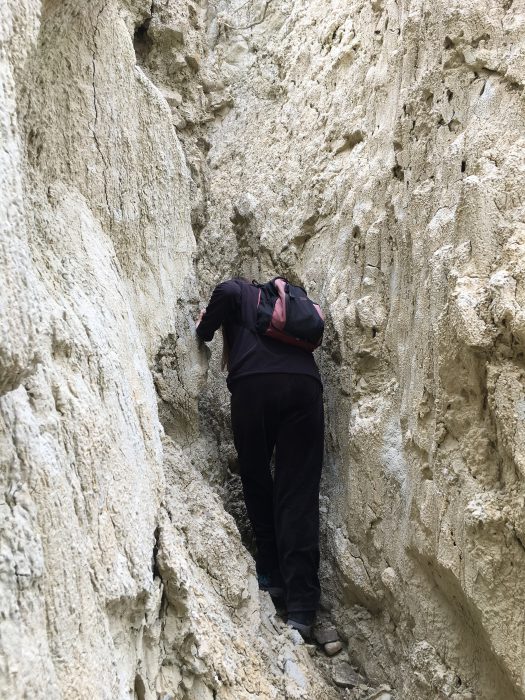 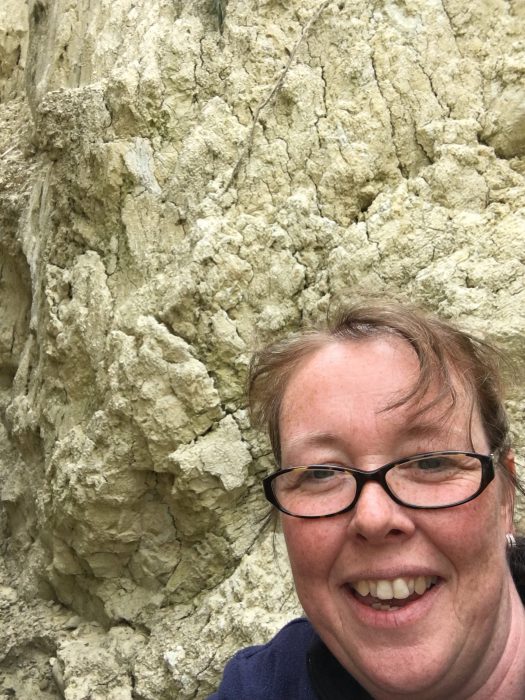 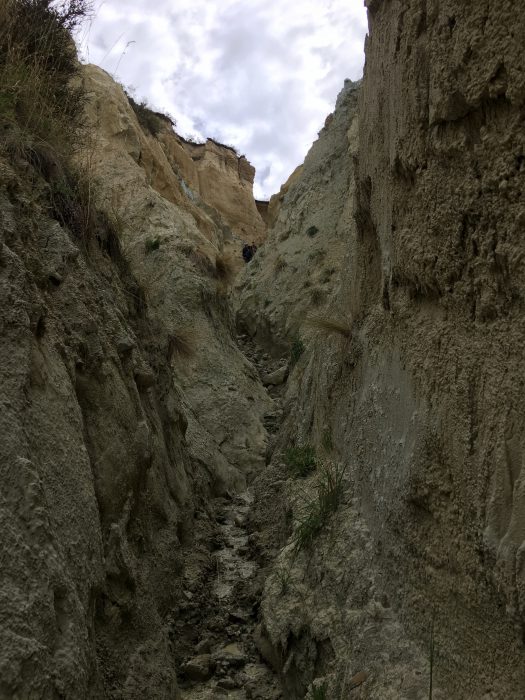 Having explored the badlands as thoroughly as we could, we hopped back in the JUCY van only to have LS Mentor announce that one of her bucket list items was to put her hand into a glacial stream. Amidst girly screams and splashes she took off to the nearby stream and started splashing around until her hand went numb. Having watched her, the entire busload of palaeontologists all began splashing in the glacial water, much to the irritation of Ewan, our post-conference tour guide. I tried to explain what a bad influence she was, but became distracted by the fun…..so I joined in! The water was icy. SO COLD! But it was blue, and clear and fresh! 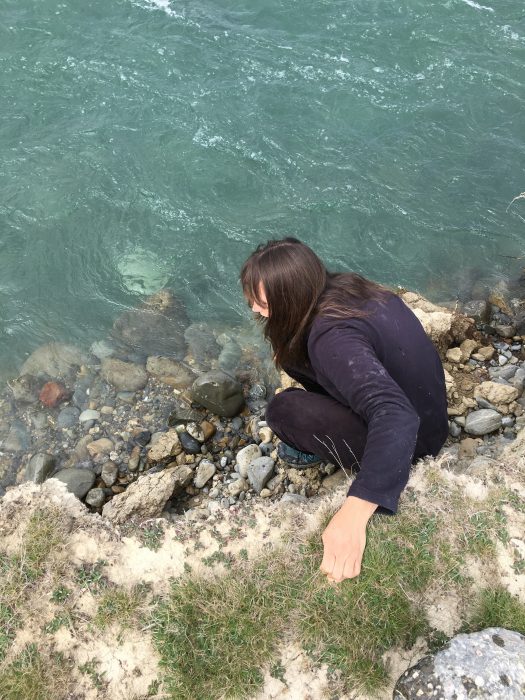 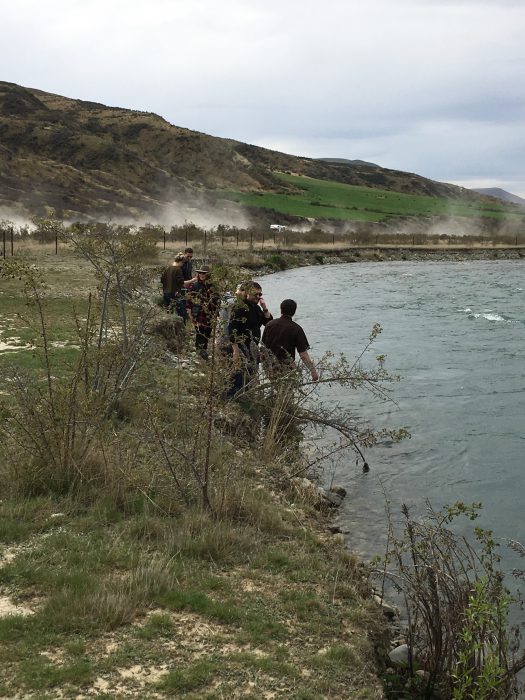 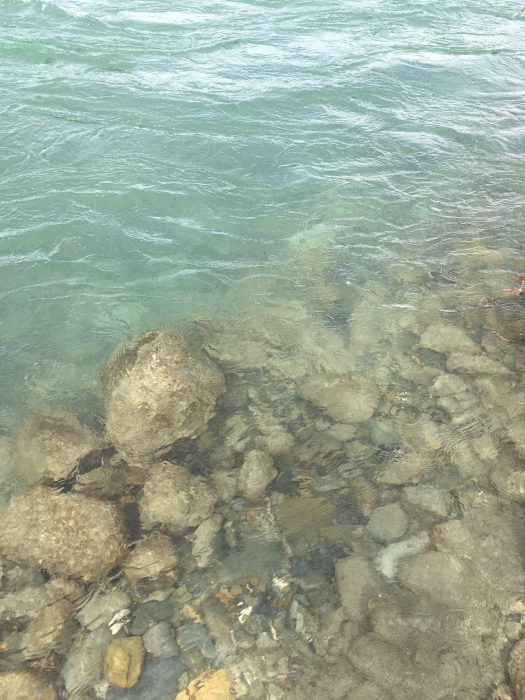 Managing to extract the Long-Suffering Mentor from the icy depths, we continued on our journey to the Waitiki River Torless outcrops below Benmore dam. The strata includes Triassic shelly marine fossils and non marine plant beds, but we didn’t find anything. The fold on the rocks was amazing though – the anticlines and synclines showed exactly how much force this particular part of the earth is put under with it’s tectonic movement. A fun time was had scrambling over the rocks in the hopes we might find a dinosaur…..but not today! 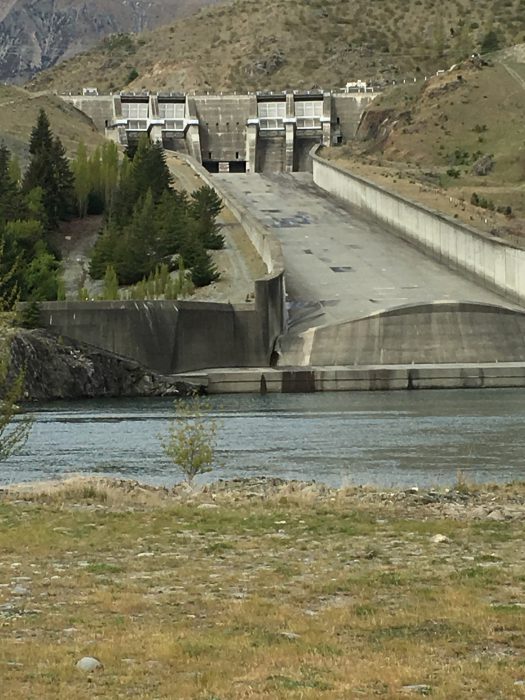 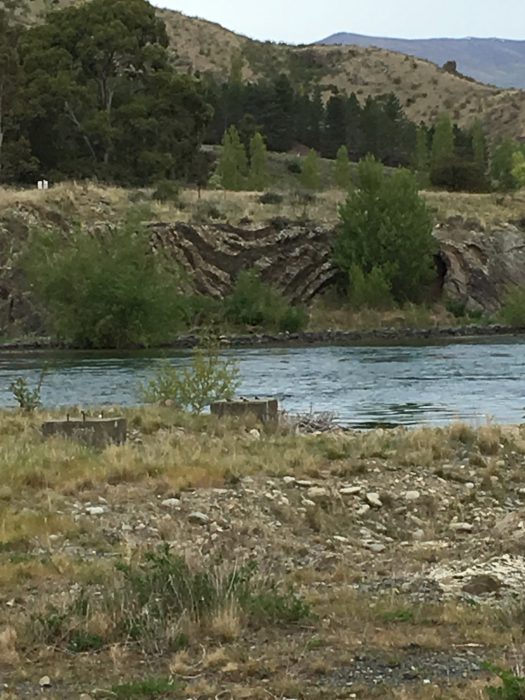 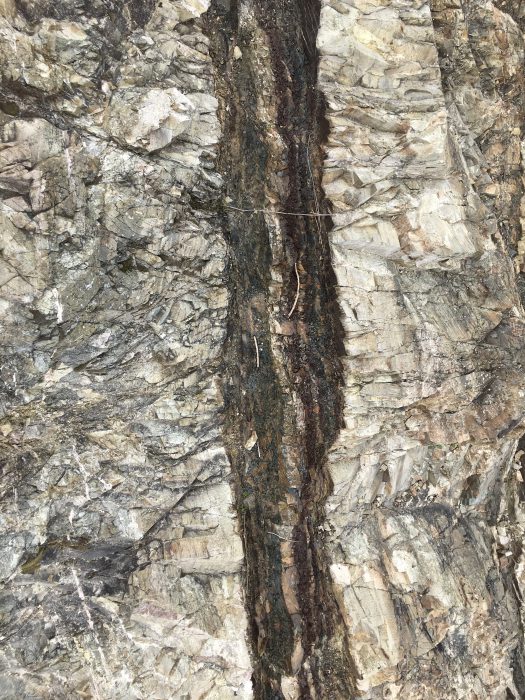 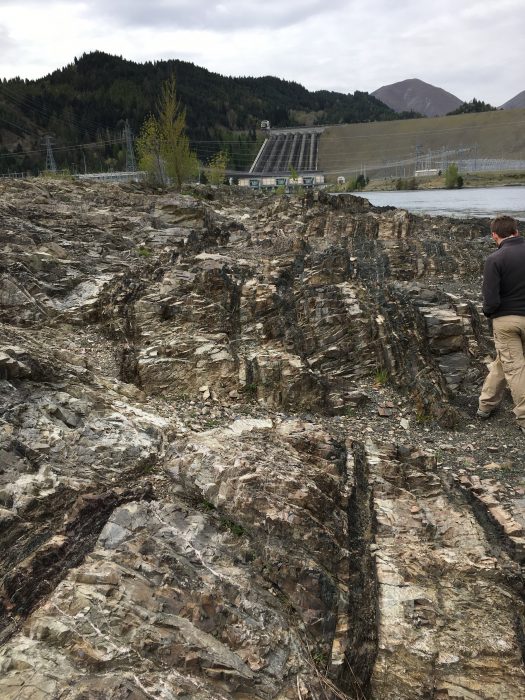 I love this photo! You can see the movement that the rock has undergone. The whole strata has shifted to the left! Awesome tectonic illustration!

Continuing our journey we made our way to the town of Duntroon where the Vanished World Centre is located. It’s a plaeontological/geological field centre showing examples of the types of fossils found in the area. A few minutes exploring the rock room was enjoyed by all! 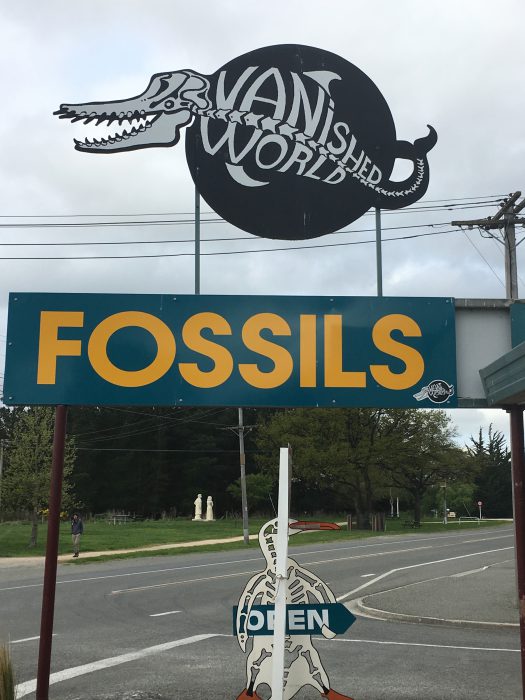 The next stop on the post-conference field trip was a place known to locals as The Earthquakes – Oligicene formations deposited during the peak transgression onto Zealandia. Fossil whale, dolphin and penguin have been found in this location, although I must admit, I was more interested in the limestone formations than the bone! 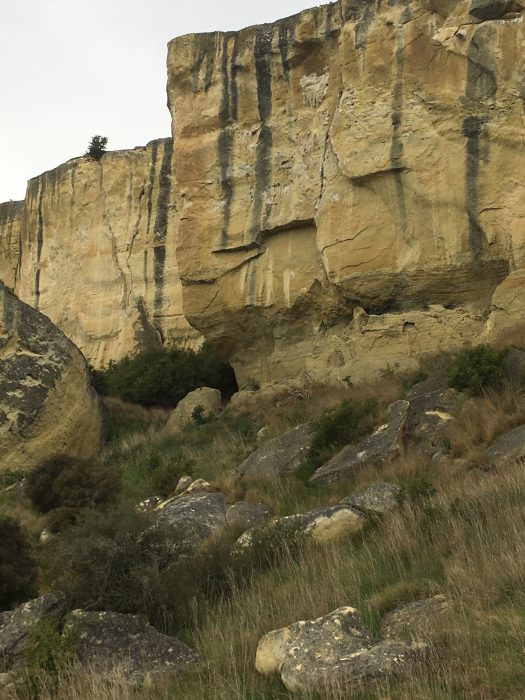 What do you call a group of palaeontologists?….. 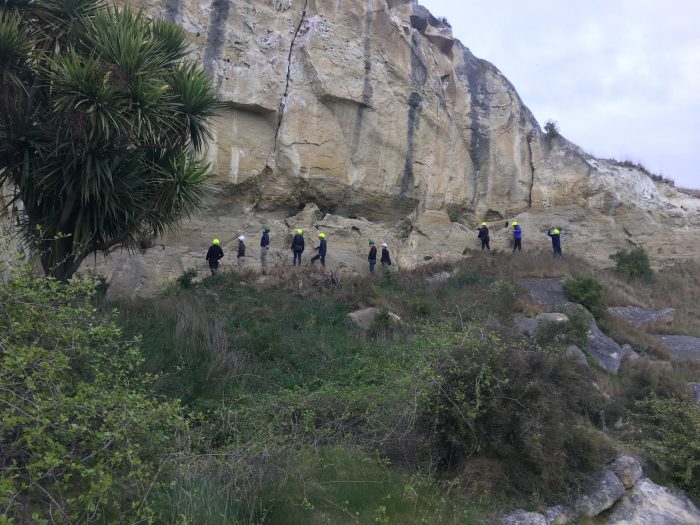 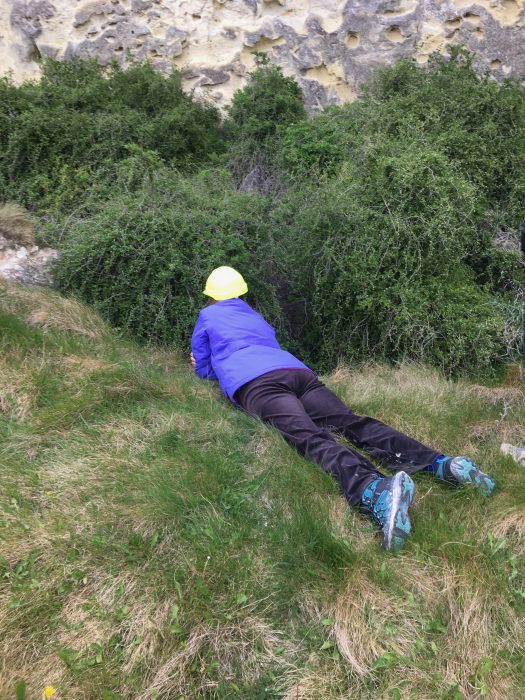 Apparently there was a skull found over the side of this cliff. I had to stop LS Mentor from climbing down the cravasse and trying to locate more skeleton. Ewan (our Post-Conference leader) was about to have kittens!

Having thoroughly tired ourselves out we headed to the beautiful township of Kurow where we stayed in a quaint little pub and had the best dinner! And a well deserved coke…..

The bedspreads were just gold!