Having thoroughly had my tanty overnight regarding the cancelled helicopter trip to Franz Josef Glacier, Long-Suffering Mentor (also known as Cardio Cathy!) decided we would do the Franz Josef Summit walk – one and a half hours walk return but most of it uphill (of course – we ARE going to see a glacier!) and most of it on very uneven surface. Glaciers leave moraines as they retreat, and these moraines are made up of really, really, REALLY unconsolidated rocks. Big rocks, little rocks, really big rocks, really small rocks. Not a walk conducive with recovering from a broken foot.

But being the stubborn lady I am, I instructed LSM (aka Cardio Cathy!) to walk ahead of me and wait for me at the glacier. If I didn’t turn up in half an hour she was instructed to come down the mountain and find me! So off she tore like a mountain goat, and I toddled off behind.

The first bit was ok. Up hill at times and panting (so unfit!). But then we hit some river crossings which didn’t involve wet feet but did involve me stumbling over rocks, which may have resulted in a small cracking sound from my left foot, which may have caused a shooting pain up into my left ankle. But looking up I saw this…… 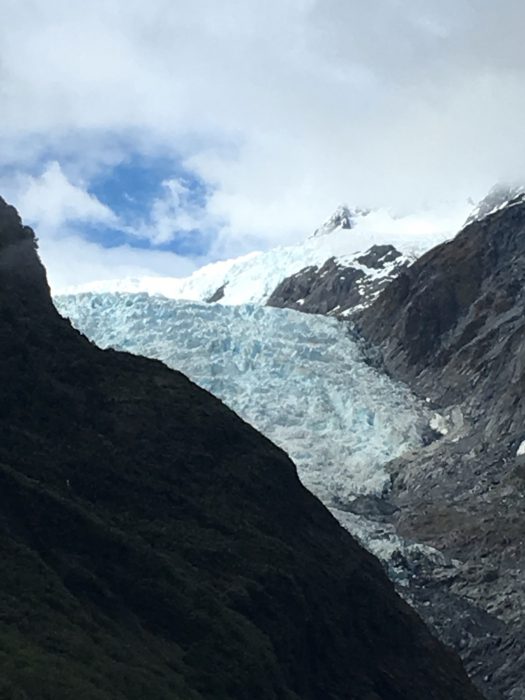 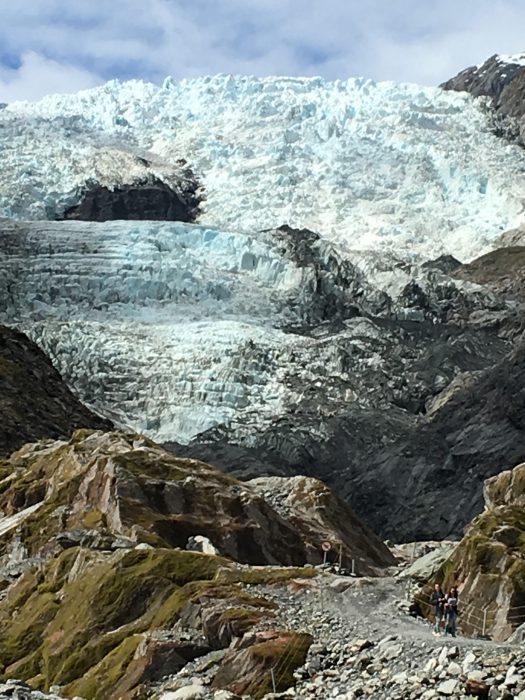 …..and so I kept going. Like a bat out of hell I steamed up that mountain and finally came within 750 metres of a real life glacier. It glistened white in the sun and you could see the blue ice. It was absolutely beautiful.

Now for those of you who don’t know (and I didn’t until a few years ago!) a glacier is a formation caused by snow compacting down very hard until it becomes ice. The crazy thing about this ice is that because it is sitting on the side of a mountain, gravity pulls it down. And because the ice is actually sitting on a small layer of water, the glacier moves. Very slowly…..but it does move. And as it moves it picks up pieces of rock. Big rocks, little rocks. And these rocks scrape along the bottom of the glacier, picking up more rocks. Which is what the moraine is. It’s just all the rocks that the glacier has picked up in it’s travels and then left when it melts. Pretty cool hey?

The blue ice is the fluid water. If you punched a hole in that ice, water would come out. But I wouldn’t recommend doing that! Lots of people have been killed by glaciers! Falling ice and avalanches are not uncommon – which is why we weren’t allowed to go any closer than 750 metres of the terminal moraine. Still, we got close enough to see it.

The waterfall was magnificent. Some rock hopping was in order to reach it but fun was had by LSM splashing in the icy water. It was so cold, and so clear, I couldn’t help but soak my hands in the beautiful waterfall. It was just magic! I should have put my foot in it…… 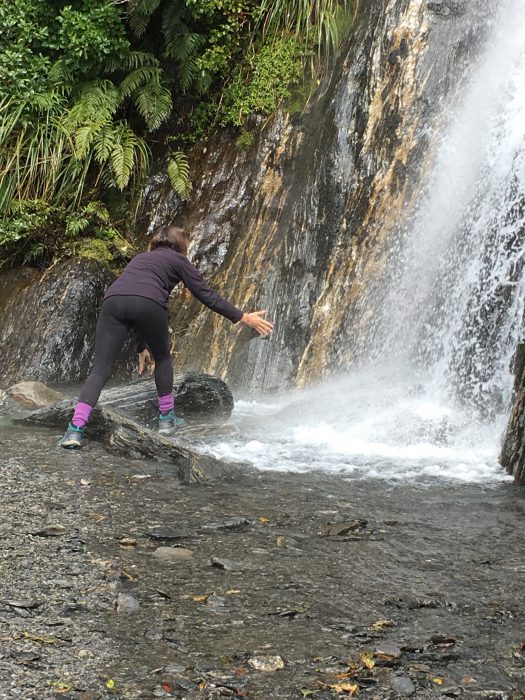 Limping down the mountain I immediately drugged up, and we began our journey back to Queenstown. I must say, the apples here are bloody AWESOME! We have had several different types now, Envy, Ambrosia, Simply red and Eve……very sweet and juicy! 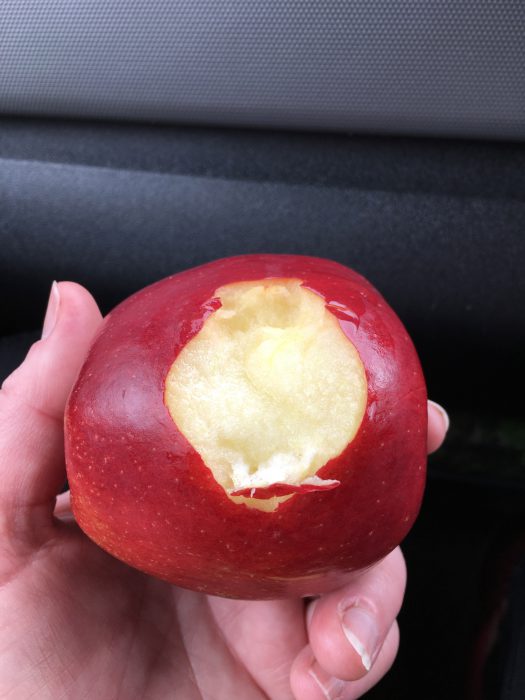 Along the road to Queenstown as you pass by the coast, there is a really wild place called Bruce Bay. We stopped there on our way up to Franz Josef, and LSM remembered that the little caravan on the side of the road sold Kumara soup. So, to placate the LSM we stopped at Bruce Bay again. This was the place that had the warning signs that in strong weather there might be debris on the road. Well, it was blowing a bloody gale! The seagulls couldn’t fly – they were just floating in one spot. The lady in the roadside caravan selling coffee was holding on for dear life, although she assured us that this wasn’t as windy as it could get! (?) Such a beautiful character, and the best Kumara soup I have ever tasted, complete with garnish! 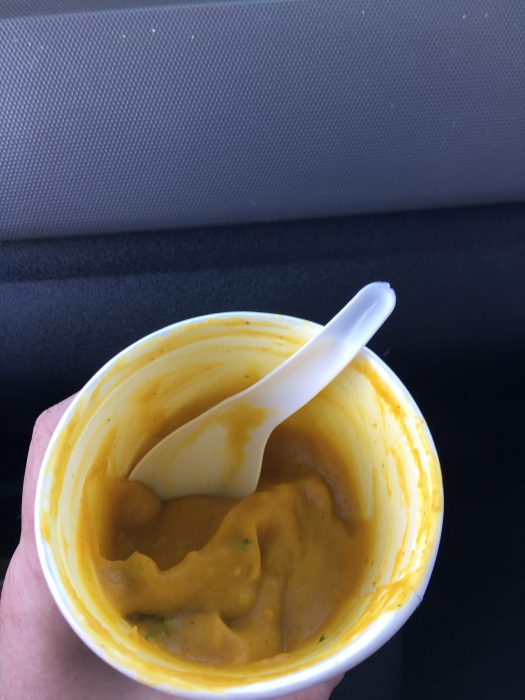 The next stop was Ship Creek – yep, we went up Ship Creek without a paddle! This beach was awesome with the most beautiful pebbles and driftwood. It was also really wild! The name Ship Creek came from a piece of wreckage that floated onto the beach in 1867. It was found that this wreckage was part of the ship “Schomberg” which wrecked off the coast of Peterborough, in Victoria, Australia. This piece of wreckage had made its way to the west coast of New Zealand, which revealed a lot about the currents and tides of the Tasmin Ocean. Very interesting…… 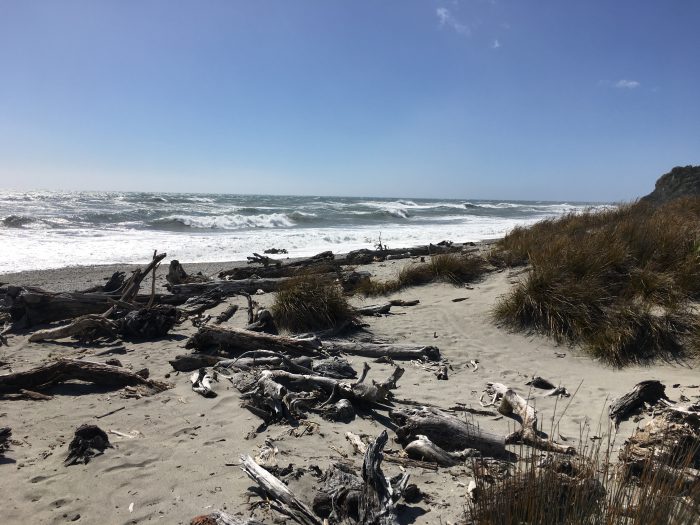 Coming into Queenstown we passed some amazing lakes. The lakes here are just huge. Like I’m talking about the type of lake where you can’t see one side from the other. Crystal clear and blue, these lakes can be hundreds of kilometres in diameter, and hundreds of metres deep. I swear, if you wanted to get rid of a body, then find a New Zealand lake! 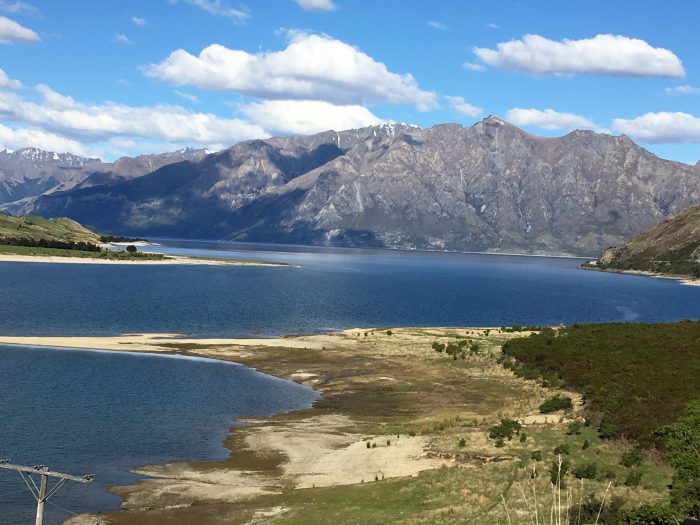 We decided to camp overnight at our favourite free spot at Shotover River, just on the outskirts of Queenstown. Having had the JUCY van for a few days now, I decided that I would be brave and try the shower facility. The shower is a small cubicle, about the size of a small broom cupboard, and it also houses the toilet. So the shower is over the toilet! Getting undressed was a little difficult as I couldn’t actually bend down to take any bottom parts off. So I kind of had to wiggle my way out of my clothes and throw them outside the cubicle as they would get wet if I had them in with me.

Having managed to derobe, I was pleasantly surprised to find the water was really hot. The hand held shower head was handy as it was difficult to turn around so it was nice to be able to spray all my bits without having to move too much. Soaping up was a little more difficult as I had to hold on to the shower as well as the soap, but a sufficient job was managed. The big problem was I couldn’t actually raise my arms high enough to spray my arm pits – but overall I think I did ok.

Towelling off and dressing was another matter. Much banging and bashing of elbows and knees, combined with high levels of expletives and “OH C’MON!” resulted in my unmentionables being only half pulled up and everything else thrown on as best I could.

I collapsed into bed exhausted……