Oh My Giddy Aunt! I have had the BEST DAY EVER!!!!

This morning after packing the car, my Long Suffering Mentor surprised me with a visit to the Young Magnesite mine. It was so good to get out of the warehouse and see some landscape. Young, NSW is stunningly beautiful with it’s rolling hills, green pastures and beautiful gum trees. We saw a lot of kangaroos and wallabies, but no wild pigs, much to Jason’s relief! 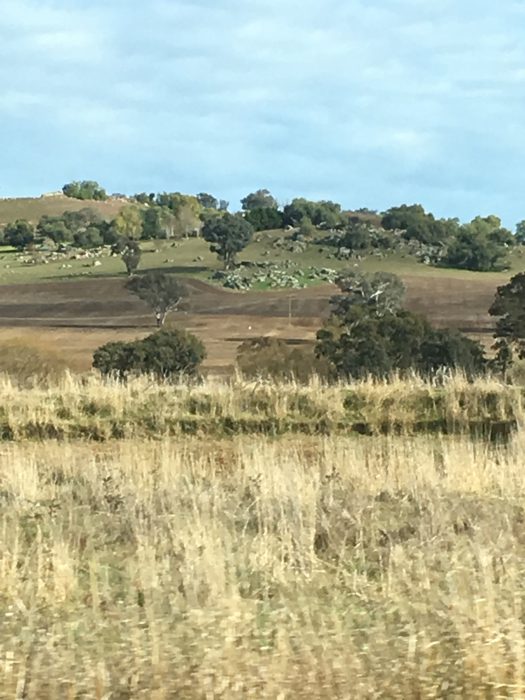 Donning our hot pink hard hats, we met up with Kevin, who has been running the mine forever! The magnesite mine consists of rock estimated to be up to 30 million years old and produces magnesite which is the highest grade in the Southern Hemisphere and the second highest grade in the whole world! Magnesite is used for many medicinal purposes and also can be used as food additives for animals. I have NEVER seen anything like what I saw today. There are lots of photos so I’ll go through step by step…. 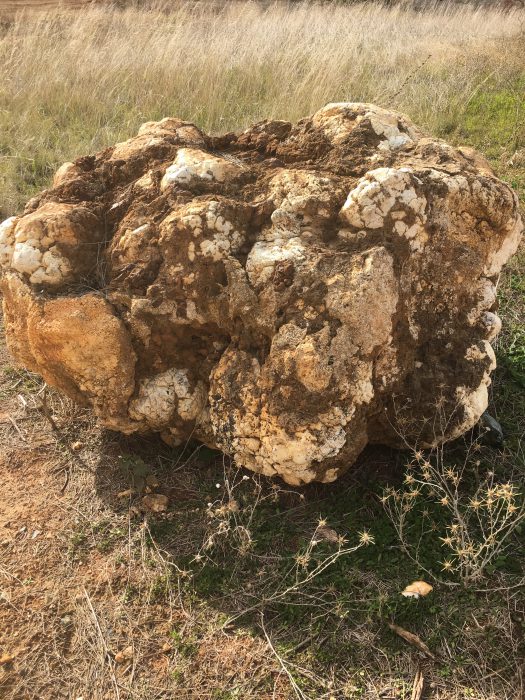 Magnesite in it’s raw form looks like a bulbous piece of white poo. But when you split it open it contains a pure white chalky powder that gives us superpowers when we ingest it! 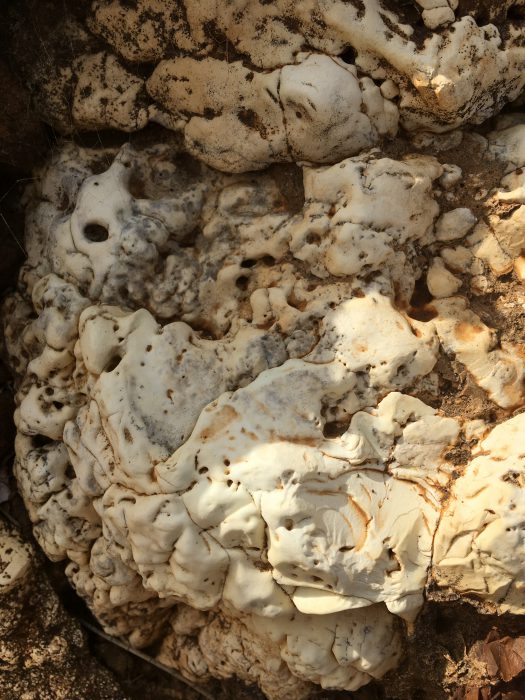 Kevin drove us around the mine site displaying piles and piles and piles of magnesite in it’s different grades – from 99.9% pure grade to 88% which is used for animal food additives. You could definitely tell the difference in the grades just by the colour of the piles. 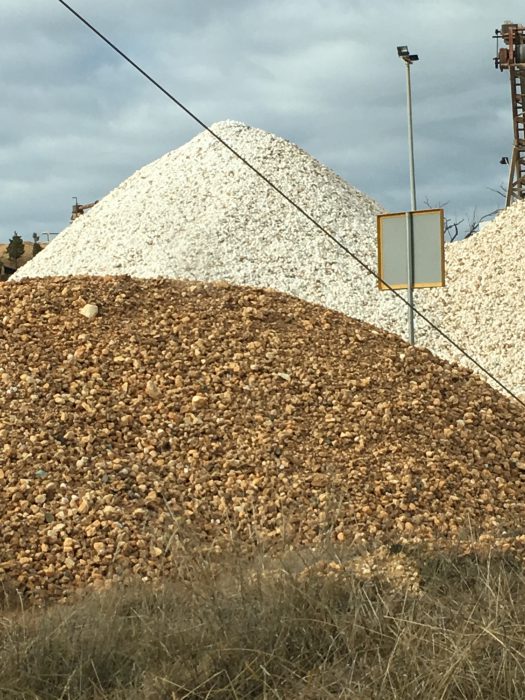 Kevin then drove us down into the mine to see the magnesite in situ. I do believe I fell down Alice in Wonderland’s hole and found myself in a magical place…..much to Kevin’s amusement! I began running from one wall face to another digging out samples and identifying the different horizons. It was wonderfully quiet and every now and then you would just hear a trickle of dirt and rocks falling from spaces. Kind of disconcerting but exciting at the same time! 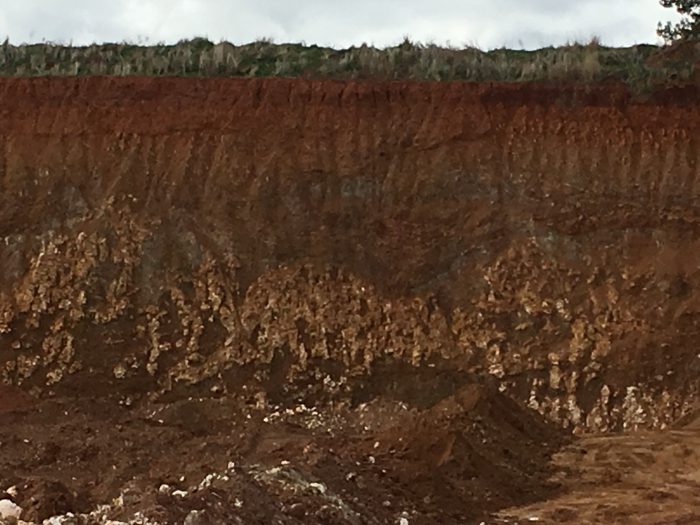 Holy Shit! Look at the fault line in that horizon! You can see the crack and fold and the slump! This picture is like a historic record. You can see where the pressure from the fault line has caused the magnesite to become compressed and therefore a higher grade of mineral. Mother Nature creates something useful from a natural occurrence.

Layers and layers of different horizons of magnesite, serpentinite (the green stuff), and periodic lumps of soapy stone. When the sun came out the wall changed colour and I stood mesmerised by the natural painting in front of me. 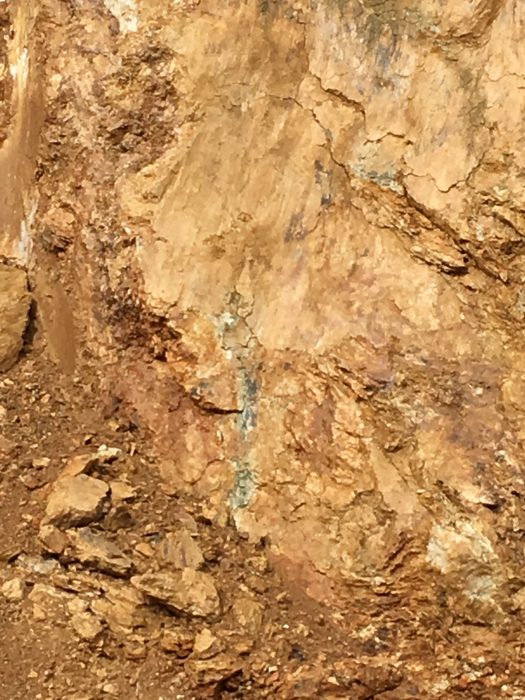 In the middle of the mine was a bright aqua lake (apparently it is that colour because of the cod poo – or so my Long Suffering Mentor says). I swear if I had a snorkel I would have gone for a dive….. 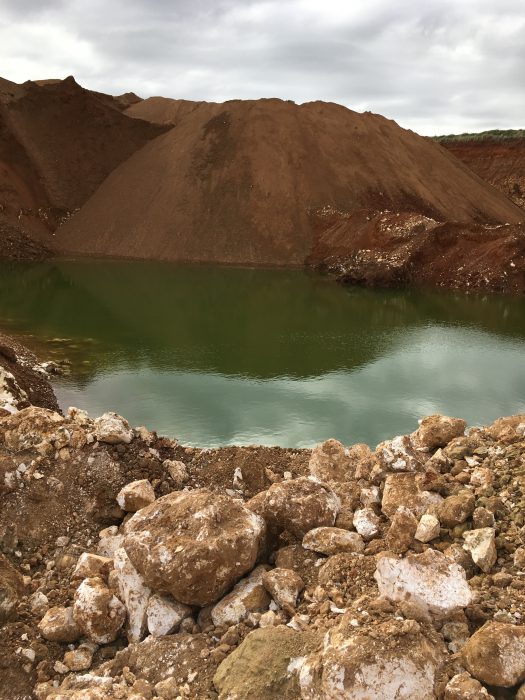 I was in paradise…… 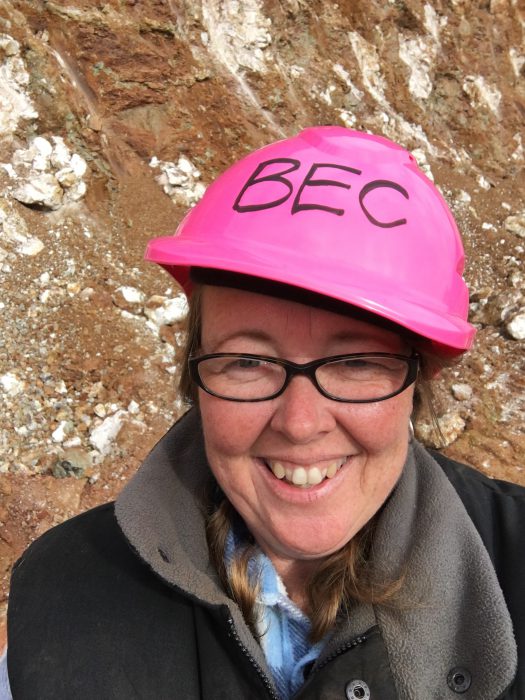 With much sadness I was forced to leave by my Long Suffering Mentor who insisted we had to actually go do some of the work that we were being paid to do (sigh!) so after saying goodbye to my new best friend, Kevin, and being kindly presented with a mica and pyrite rock and an overcooked magnesite (a clinker!), we set off to find the rest of our Geology team who were waiting for us at the first drill site…..

So….we got lost…..several times…..and had to call the ever-faithful Althea….several times…..for directions. In our last ditch effort, we came hurtling along another dirt road only to notice in the nearby field a truck with a flashing light surrounded by cows! I was having a giggle when we quickly realised that the truck was actually the rest of our Geo team, who were being accosted by a huge herd of very inquisitive cows. I fell over laughing at the looks of the fieldies faces – Jason was actually hiding in the trailer to escape the huge snotty noses and salty tongues. The cows stood and watched us make a cup of tea, almost as if waiting for us to entertain them.  Instead we were being entertained by a chorus of moos and squeaks, and periodic dry humping! 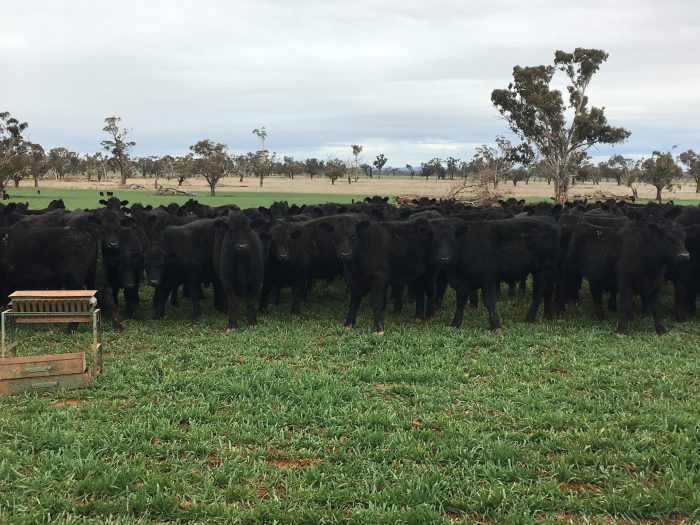 Jase was not amused…… 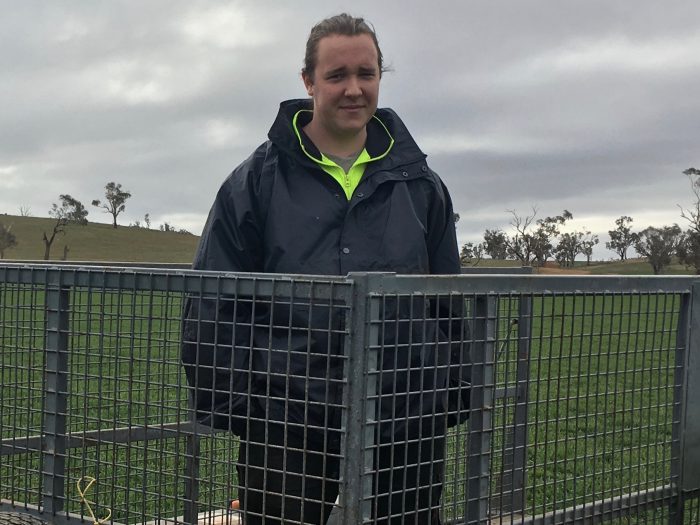 So, with some occupational disturbances (i.e. the driller didn’t turn up!), we left the cows to their own devices and stored the trailer where it couldn’t be eaten (for some reason the indicator lights were a real delicacy!) and headed back to the apartment for a full day of drilling tomorrow. Hopefully the cows will allow us to do some work, having already eaten the pink bunting on the hole flags that we had pegged out yesterday.