It was f*&^ing cold! I think my face froze off overnight! It was so cold that I had to hover over the dunny seat to stop myself sticking to it! Bloody hell New Zealand can get cold….

Anyways, having warmed my nethers over the gas stove, we set off towards Milford Sound. Along the way were more lakes that went on forever, Highland cows that looked mean and hairy, roadkill hedgehogs that I was itching to stop and get a look at (I’ve never seen a hedgehog before!) and even more clear rivers and streams. 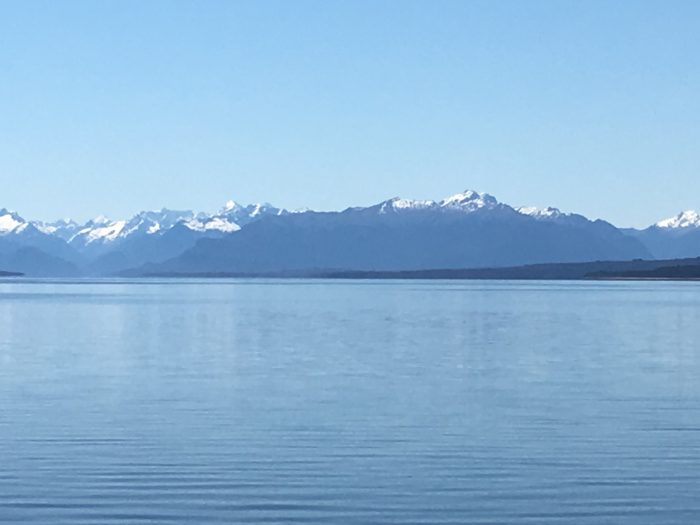 We stopped for lunch at Te Anau, a beautiful little town right on the HUGE Lake Te Anau. At the coffee shop there were alpacas that you could feed for $1. If you rustled the paper bag they would all come ambling over and expect you to give them treaties. One fella got a bit miffed with the look of me and spat – but other than Mr Grumpy-pants they were all rather friendly and enjoyed some attention. I got my animal fix a little…. 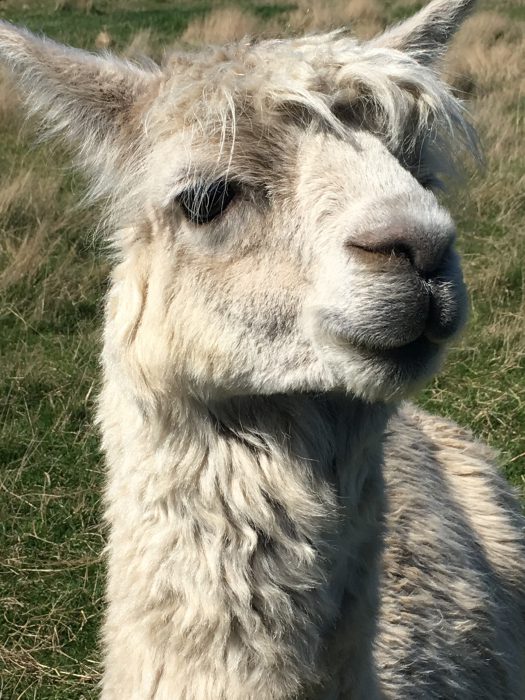 Something that is somewhat unnerving here in New Zealand is the air raid siren that periodically goes off! When I first heard it I watched to see if any locals were running, but no one seemed too fazed. I braced myself for earthquake but unfortunately that didn’t happen! No tsunami either! It took me a few times to realise that it’s the fire station siren, so whenever a fire is called in the station sounds the siren. Somewhat disappointing but there you go……

After a quick beer for LSM at the local, we boarded our vessel to go see some glow worms! The Te Anau Glowworm cave experience is a must for everyone heading through Te Anau.

This is the before shot on the boat….. 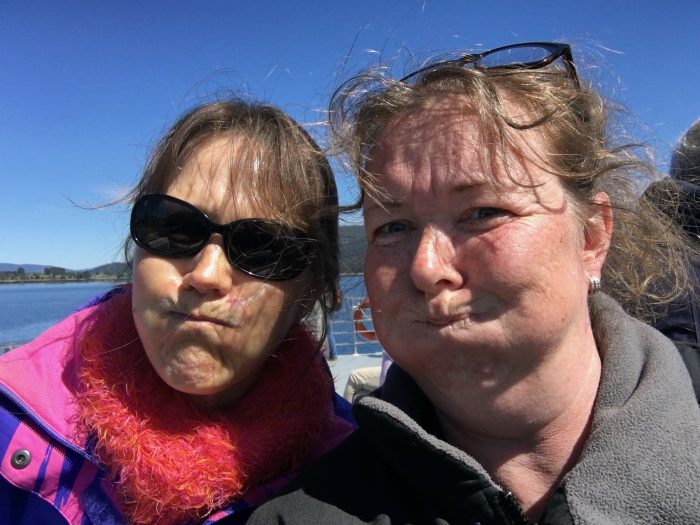 After a scenic cruise of Lake Te Anau (which is bloody enormous!) we successfully navigated a no spew boat trip – mostly because I made Long-Suffering Mentor sit at the top of the boat in the open, in the freezing cold which meant we were both distracted from the up and down motion! No spew! We arrived at the island in the middle of Lake Te Anau. 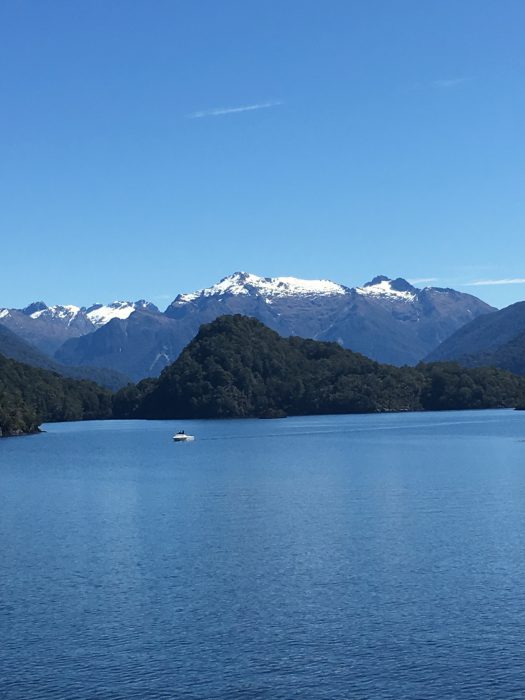 Only 12,000 years old (very young in geology time!) the caves on the island are still being carved out by the force of the river that flows through them. The result is a twisted network of limestone passages filled with sculpted rock, whirlpools and a roaring underground waterfall! 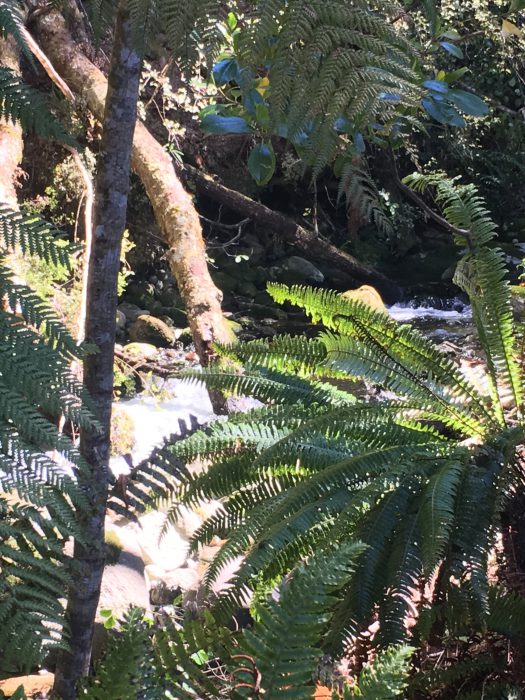 After a demonstration about glow worms and a quick nature walk, we began our walk through the cave system. The roar of the water was phenomenal and the carved limestone with it’s fossils still in place was just magic. Apparently these caves were lost in legend. Their presence was only hinted at by the ancient Maori names for the area – Te Ana-au – which means “caves with a current of swirling water”. They remained hidden until their rediscovery by explorer Lawson Burrows in 1948 – he fairly must have shit his dacks when he found them! 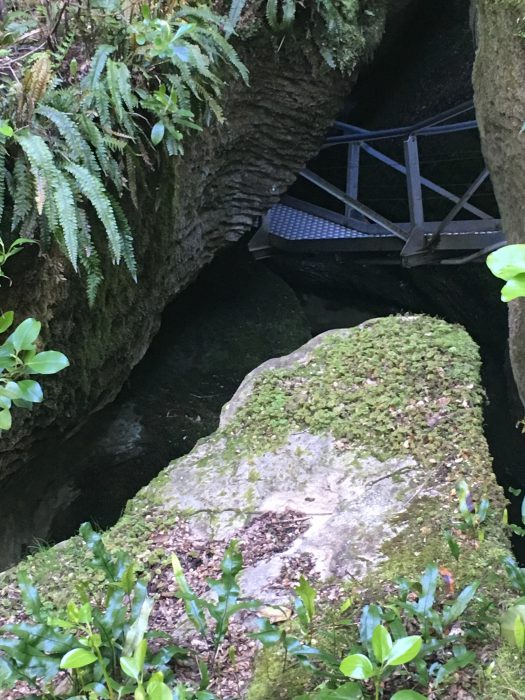 After going through caves that you had to pretty much bend right over to get through them, we then boarded a small boat (more like a skip!) and was guided through the water in the pitch darkness. Upon looking up there were thousands of glowworms, shining a bright greenish white. You could see the threads of their silky “webs hanging down like glistening beads, and everywhere you looked were clusters of bright dots of light. It was absolutely wonderful! Luckily I had no one sitting behind me in the boat because my head was leaning back so far I would have knocked people out!

A beautiful cruise back to Te Anau, with LSM burping all the way due to the too-quickly-consumed beer, we stopped for some sweet potato fries and use of the wifi (and the flying fox by LSM!) and then headed off toward Milford Sound. 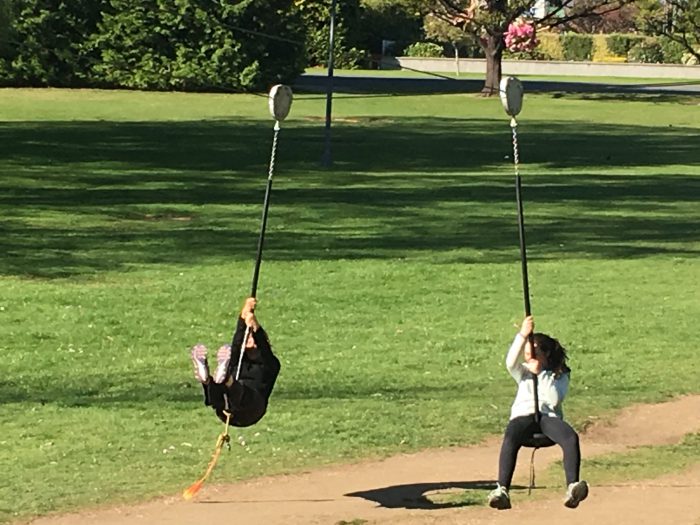 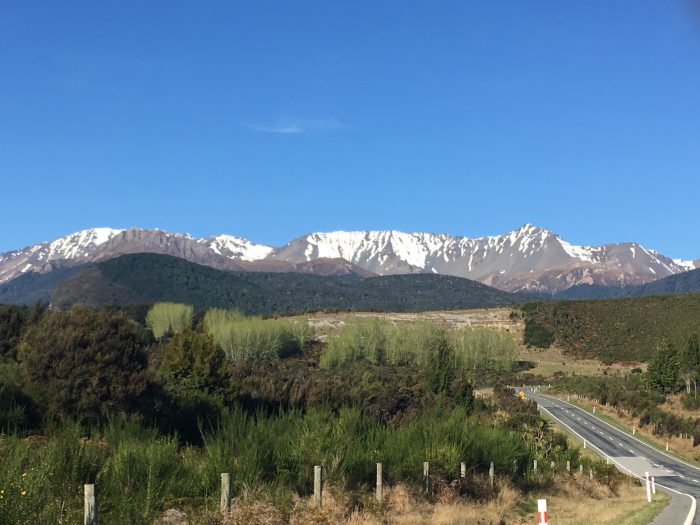 Along the road there were signs warning about avalanches and “No Stop” zones due to the risk of avalanche and rock falls. From every crevice in the mountains around us, waterfalls spouted forth, big ones and little ones, all making their way down the mountainsides. And there was snow! Real snow – powdery snow that was white and glistened in the sunlight. 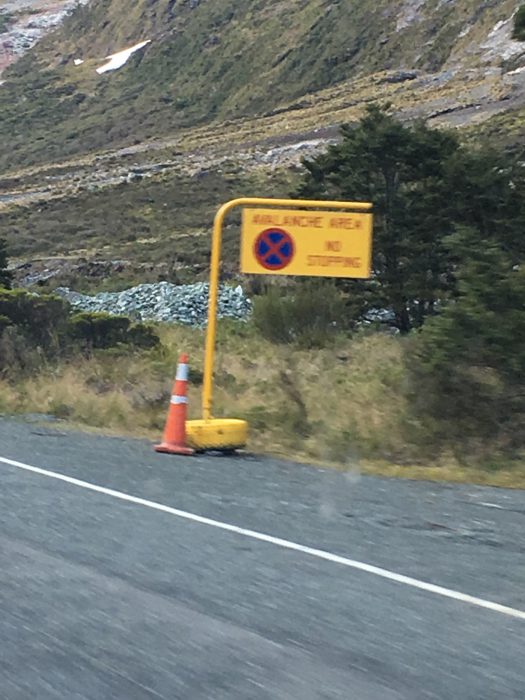 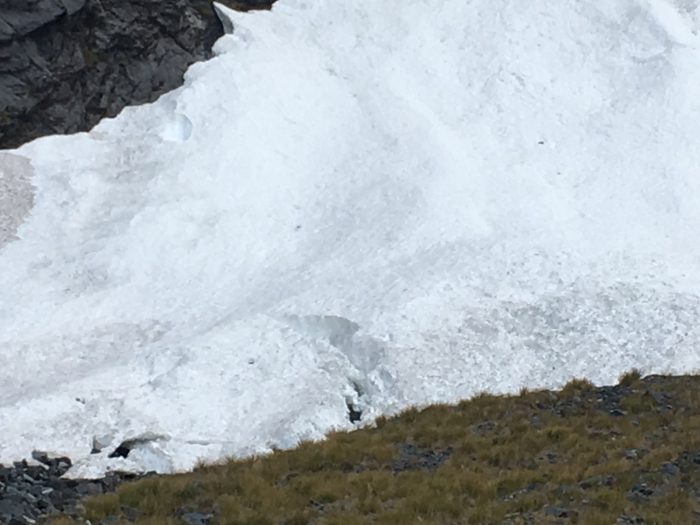 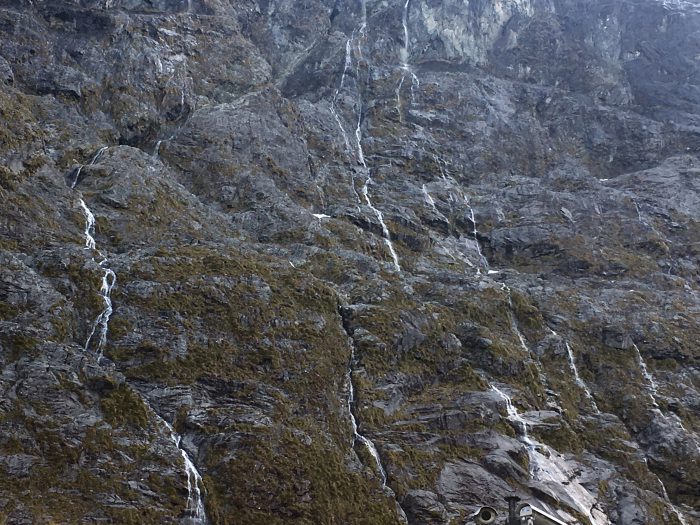 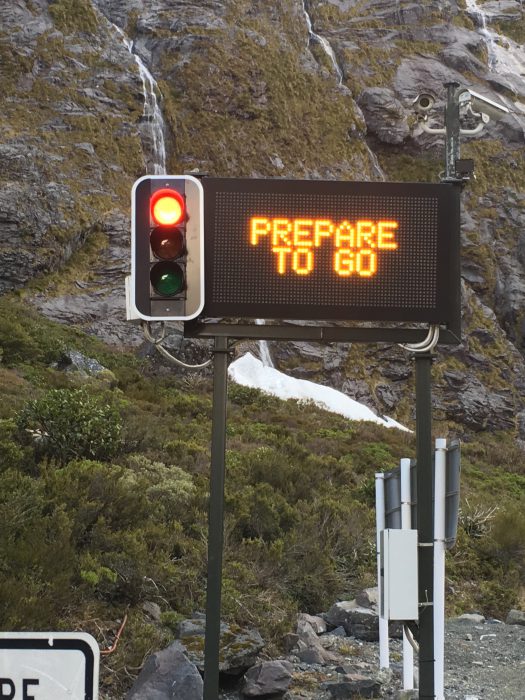 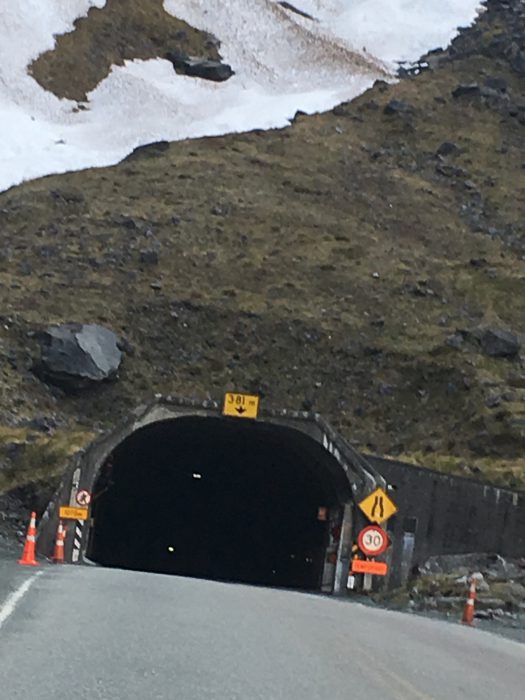 It was built in 1948 and only fits one car in at a time. It was dripping water and not looking too sturdy. But it cut right through the mountain, so instead of fearing an avalanche I was fearing an avalanche that would bring down the rickety old tunnel too! It was at this point several expletives exploded from my mouth and the demand to know where the f%^$ Long-Suffering Mentor was taking me?!!!

Making it to daylight was a relief….. 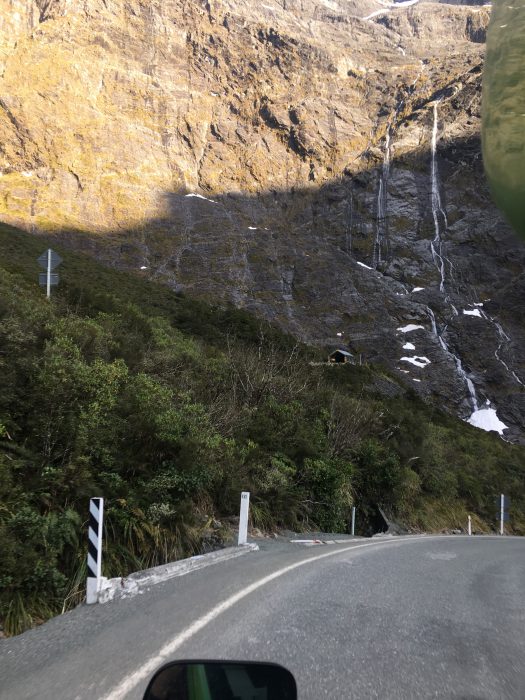 The tunnel emerged into the most awesome, biggest, gorgeous gorge I have EVER seen! Massive waterfalls pounded down the sides producing thick sprays of mist. Driving in to Milford Sound a thick forboding cloud covered the sounds almost completely. Hopefully it would clear by morning as we had a cruise booked! 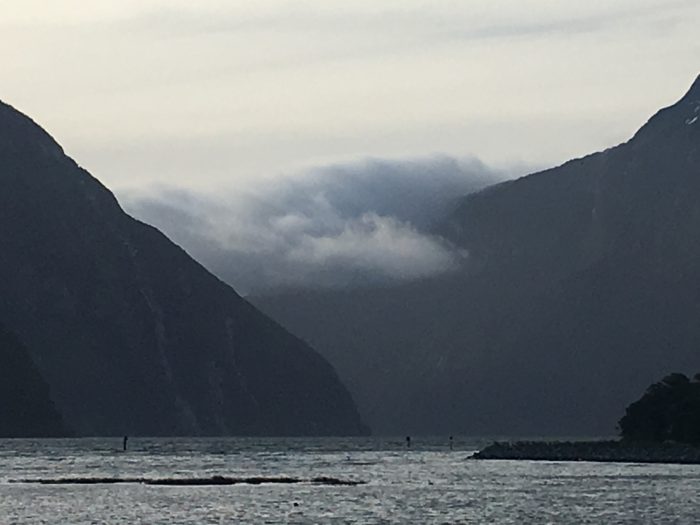 We found our fancy campervan site – the only one in Milford Sound so we kinda had no options – but it did have a laundry and heated towel racks in the bathrooms, so after a healthy dinner of packaged macaroni cheese with vegies through it and the rest of the Stoneleigh Pinot Gris, we had an early night, with Long-Suffering Mentor snoring softly in her cave!