So, I went to the Doctor and after being pumped full of drugs I got the all clear to come back to the dig site…..(actually I begged and pleaded and made promises of resting lots and making sure I didn’t overdo it…..yeah right!).

Upon arriving back on site the weather was so inclement that the crew had called it a day. It was cold, wet and bitter – to the point people’s fingers didn’t work anymore. So instead of an active dig site, I walked into the common room full of scientists all doing their second most favourite thing! Drinking!

So, when Cam and Tim (when I grow up I want to be like Cam and Tim – or marry their brains!) asked me to go and help them do something on the dig site I assumed they were just going to show me around. Five trenches have been opened up and two of them are yielding a lot of bone and teeth. I was desperate to see! We walked over to the dig site and approached a tarp that was covering three heaps of dirt. When we pulled back the tarp the dirt was full of clay and was quite wet and heavy.

And then I nearly wet my pants! We began to pluck pieces of bone and teeth from the clay. Macropus titan teeth, incisors, an intact metatarsal, bone fragments, half mandibles…….oh my f$%^$#@ gawd! And this was just on the surface of the mound. I can only imagine what was in the centre clumps. 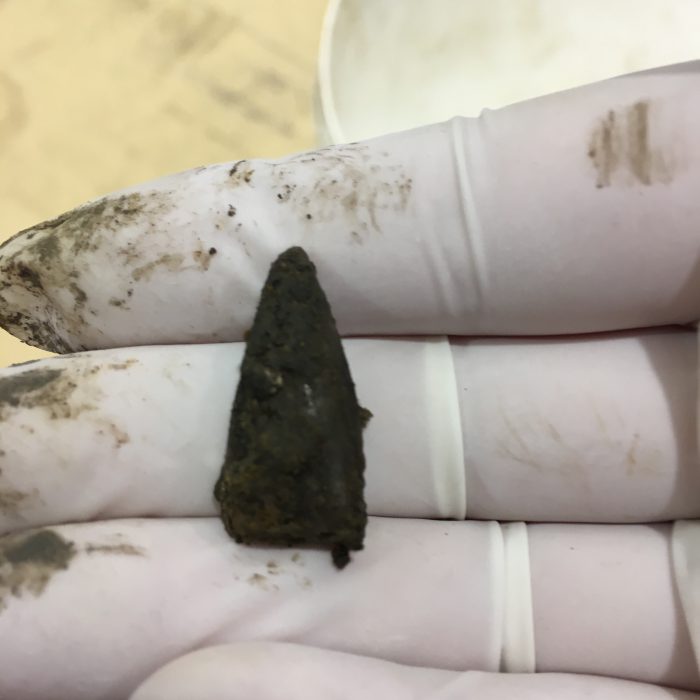 Yes folks…..that is a pretty big incisor……and I found it!

So now I am the Girl Who Fell In Love With Rocks But Also May Want To Be A Palaeontologist because today was too much fun to even BEGIN to describe! And tomorrow I get to spend THE WHOLE DAY doing this!

One thought on “DAY THREE – LANCEFIELD DIG – I’M BACK!”